We will start by saying if you don’t own either a Davis Vantage Vue or Vantage Pro2, the Davis AirLink might not be your best option. However, if you do, and have already upgraded to the new WeatherLink Live access point, then it’s an awesome deal. The AirLink is one of the top-tier air quality monitors on the market right now, hands down.

We’ve had our AirLink installed for the better part of a year now and can vouch for the quality and performance of the device, and would happily recommend it to anybody interested in tracking air quality at their home. The AirLink is built for the new WeatherLink platform, and you can add as many AirLinks as you want, both inside and out. 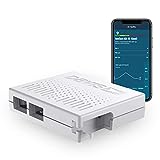 Setting up the AirLink

Thanks to the new WeatherLink Live base station, setting up the AirLink isn’t too difficult, but maybe not as user-friendly as some other stations, like the Ambient Weather WS-5000. But all you need to do is set the device up near a power outlet or USB hub, plug it in, and add the device through the app.

Davis provides you with a cover that you should use if you decide to place the sensor outside. Inside, no cover is required, and it can either be placed flat on a shelf or desk using the supplied footpads or mounted vertically using the mounting bracket.

To install our AirLink, we actually used outdoor-rated double-sided tape to mount it to our siding rather than drilling holes. The sensor is light enough to be mounted in this manner and hasn’t moved since we installed it about a year ago.

Within a few minutes (or seconds), your data should begin to appear in your WeatherLink account. The process was completely painless for us.

You can access your AirLink data either through the WeatherLink app or the WeatherLink website. You can select whatever air quality index is local to you, but it will default to the U.S. AQI system if you don’t. The Nowcast AQI is the number most commonly reported, which is shown prominently in the app.

We found the AirLink’s sensors to be extremely sensitive and accurate. Compared with local readings from professional air quality monitors, the measurements were believable. Our sensor was live and reporting over the July 4th weekend, and we caught the sudden changes in air quality on two separate nights as people set off fireworks.

Be sure to place your AirLink sensor as far away from your home’s windows and doors as possible. In our initial installation, the sensor was quite close to one of our windows. We later found out that the odd sudden jumps in particulate matter resulted from us opening our windows for fresh air!

While our mounting location still isn’t as optimal as we’d like (see the above picture), it’s in a spot that isn’t affected by airflow out of the house. Since it requires AC power to work, you’ll need to find a place where you’re within about two feet or so of a power outlet. That might be difficult for some.

A great addition for any Davis station owner

Upgrading to the WeatherLink Live base station is worth it, and the AirLink shows why. Davis has made its whole platform modular now, Allowing you to save some money on what’s an otherwise expensive weather station brand. That said, we wouldn’t go out and buy a Davis weather station because of it. There are plenty of great air quality monitors, some cheaper than the AirLink.

However, if you’re already in the Davis ecosystem, the AirLink makes quite a lot of sense to pick up. It’s competitively priced and integrates seamlessly with the WeatherLink app and platform. It’s given us no problems in our months-long test, and the capability to measure PM1 levels is rare in consumer-grade air quality monitors.